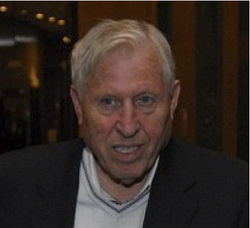 Mr. Kislin was born in Odessa, Ukraine in 1935. He graduated from Moscow’s prestigious Institute of National Economy in 1965 with a degree in Economics. In the early 1970’s, he emigrated to the United States with his wife, Ludmila, his daughter, Regina, and his son, David. He first settled in Boston, Massachusetts and found work at various jobs to support his family, including a grocery clerk and taxi cab driver.

After moving to Brooklyn, New York in 1976, and with the assistance of fellow Russian émigrés, Mr. Kislin established a small electronics store, where he sold goods to local residents. He began trading goods with the former Soviet Union and, in time, became well respected in the international business community. In 1992, he established Trans Commodities, Inc., which he ultimately developed into one of the world’s premiere commodities trading firms. With branches located in Moscow, the Urals, Switzerland, Italy and New York, the company specialized in the international purchase and sale of metals products, while at the same time investing generously in the development of infrastructure and production processes of mills located in Ukraine and Russia. More recently, Mr. Kislin’s principal focus has been on real estate investment and development in the city in which he grew up, Odessa, Ukraine, as well as in Moscow, Russia. His companies currently own approximately 10,000 acres of real property in the two cities.

In 1994, Mr. Kislin was appointed by the Honorable Rudolph W. Guiliani, Mayor of the City of New York, to serve on the Mayor’s Council of Economic Advisors, and he remained an active member of that body until 2001. In 2003, he was paid tribute by the New York City Council with “honorary citizenship” in the City of New York, one of the first such honors given to an immigrant.

In addition, Mr. Kislin and his wife have long been supporters of many philanthropic projects that have assisted Jewish families to leave the former Soviet Union and relocate to other parts of the world, including Israel. In 1993, he was recognized as “Man of the Year” by the UJA Federation-Russian Division, and he has since served as an officer for the Council of Jewish Émigré Community Organizations, a central coordinating body for New York’s Russian-Jewish community. He has also been active in the Be’er Hagolah Institutes, which is the largest school in the United States dedicated solely to educating the children of Russian immigrants of Jewish decent. His contribution to education in Israel was recognized by the naming of “The Kislin Library,” a college library in the Sha’ar Hanegev Region in Be’er Sheva, Israel.
Sam Kislin - About.me
Sam Kislin on Tackk
Sam Kislin Resume
Sam Kislin at AngelList